Best of luck to all nominees in all three categories!

Tickets for the event are €8 and will be available at the door. Light refreshments will be served with live music to follow the awards. This promises to be a great night!

The nominations are in and the top five in each category shortlisted – did your nominee make it in? Take a look:

Mystery shoppers will visit all shortlisted businesses over the coming week to decide the overall winner in each category and will be announced at the awards night on the 20th October, 8pm at the West Cork Hotel where Oceans Seven Champion Steve Redmond will address local business people on the importance of remaining positive in challenging times.

Skibbereen & District Chamber of Commerce are once again in search of the town’s friendliest businesses & employee. The awards will aim to copper fasten Skibbereen’s position as Ireland’s friendliest town.

This year the Friendliest Business Award will be split into two categories, small (1-10 employees) & large (10 plus employees). Now is your chance to nominate the businesses you feel are friendly, welcoming & courteous & an employee who goes above & beyond the call of duty for customers.

Closing date for nominations is Saturday 6th October, after which a group of mystery shoppers will visit the shortlisted businesses to decide the winners. Brendan O’Brien, who won the award last year for Skibbereen’s Friendliest employee, said he is looking forward to handing on his crown this year, ‘it has been great to hold the title for the past 12 months and I encourage everyone that shops in Skibbereen to vote for another deserving winner this October’.

A shortlist of nominees will be announced before the event with the winners being crowned at the special ceremony in the West Cork Hotel on Saturday 20th October.

To vote fill in the nomination form in this week’s Southern Star, nomination forms will also be available in businesses throughout the town over the coming weeks and can be returned to Sean Murray Fashions or the Southern Star Office, alternatively you can email your nomination to chamber@skibbereen.ie by 6th October. 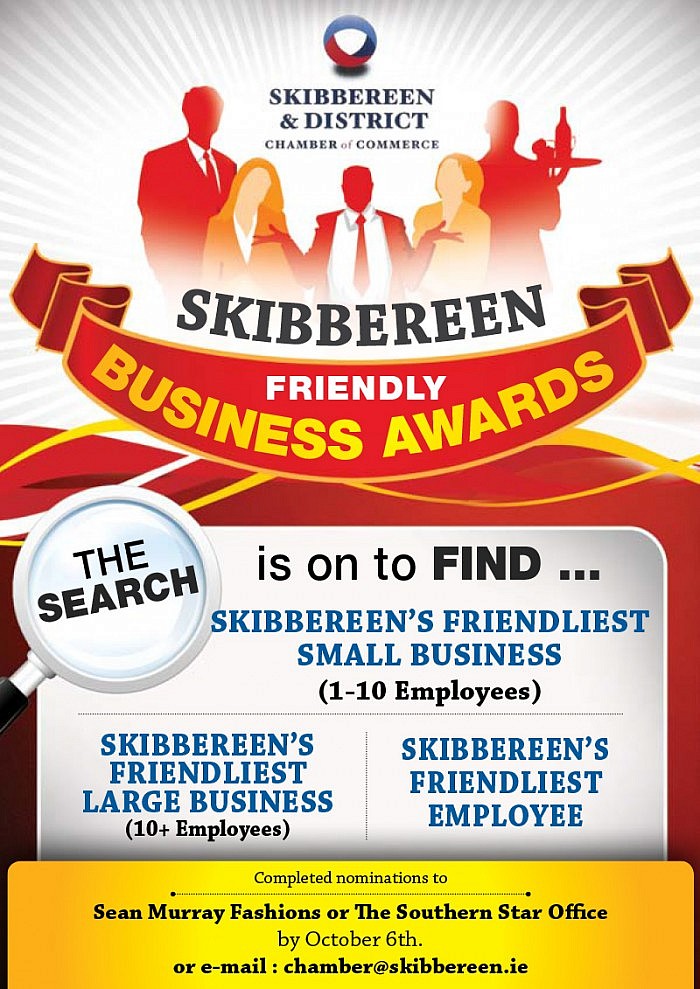